Publication in Frontiers in Plant Science

Urban agriculture systems can significantly contribute towards mitigating the impacts of inefficient and complex food supply chains and increase urban food sovereignty. Moreover, improving these urban agriculture systems in terms of nutrient management can lead to a better environmental performance. Based on a rooftop greenhouse in the Barcelona region, we propose a cascade system where the leachates of a tomato cycle from January to July (donor crop) are used as the main irrigation source for five successive lettuce cycles (receiving crop). By determining the agronomic performance and the nutrient metabolism of the system, we aimed to define the potential of these systems to avoid nutrient depletion and mitigate eutrophication, while scaling the system in terms of nutrient supply between the donor and the receiving crops. The results showed that low yields (below 130 g per lettuce plant) are obtained if a cascade system is used during the early stage of the donor crop, as the amount of nutrients in donor’s leachates, specially N (62.4 mg irrigated per plant in the first cycle), was not enough to feed the lettuce receiving crop. This effect was also observed in the nutrient content of the lettuce, which increased with every test until equaling the control (4.4% of N content) as the leachates got richer, although too high electrical conductivity values (near 3 dS/m) were reached at the end of the donor crop cycle. Findings on the uptake of the residual nutrient flows showed how the cascade system was able to take advantage of the nutrients to produce local lettuce while mitigating the effect of N and P in the freshwater and marine environments. Considering our case study, we finally quantified the scale between the donor and receiving crops and proposed three major ideas to optimize the nutrient flows while maintaining the yield and quality of the vegetables produced in the receiving crop. 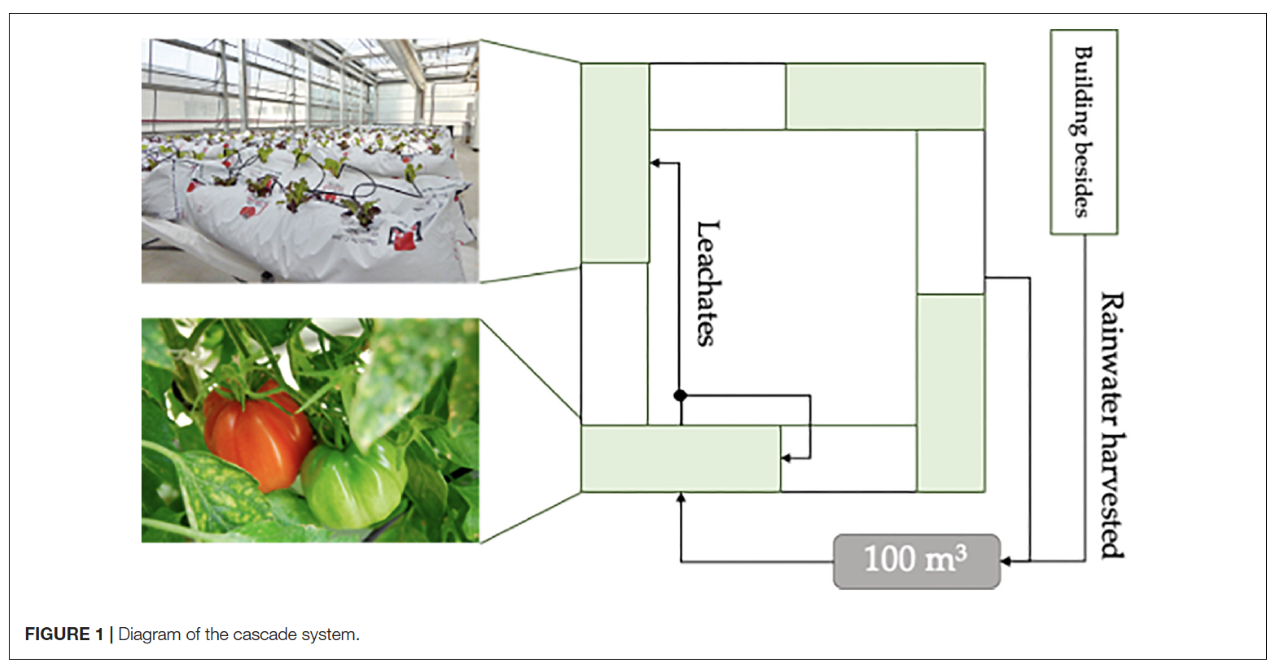 Diagram of the water flows of the system.

This website uses cookies to improve your experience. We'll assume you're ok with this, but you can opt-out if you wish. Read More

This website uses cookies to improve your experience while you navigate through the website. Out of these, the cookies that are categorized as necessary are stored on your browser as they are essential for the working of basic functionalities of the website. We also use third-party cookies that help us analyze and understand how you use this website. These cookies will be stored in your browser only with your consent. You also have the option to opt-out of these cookies. But opting out of some of these cookies may affect your browsing experience.
Necessary Always Enabled
Necessary cookies are absolutely essential for the website to function properly. This category only includes cookies that ensures basic functionalities and security features of the website. These cookies do not store any personal information.
Non-necessary
Any cookies that may not be particularly necessary for the website to function and is used specifically to collect user personal data via analytics, ads, other embedded contents are termed as non-necessary cookies. It is mandatory to procure user consent prior to running these cookies on your website.
SAVE & ACCEPT