Participation at the EGU General Assembly 2021

The URBAG members worked on three presentations during the EGU 2021 conference, where 18 155 scientists from 136 different countries have met. With approximately 13 000 users per day, the conference has been considered a resounding success. The sessions have been conditioned by the global Covid-19 pandemic, forcing it to be carried out in virtual format.

From all levels (master’s students, PhD students, postdocs), a lot of science has been shared, covering Earth, planetariums and space disciplines. The EGU encourages all scientists in these fields to assist the next conferences, which will be held from 31 May 2022 (EGU22).

URBAG participated with the following presentations: 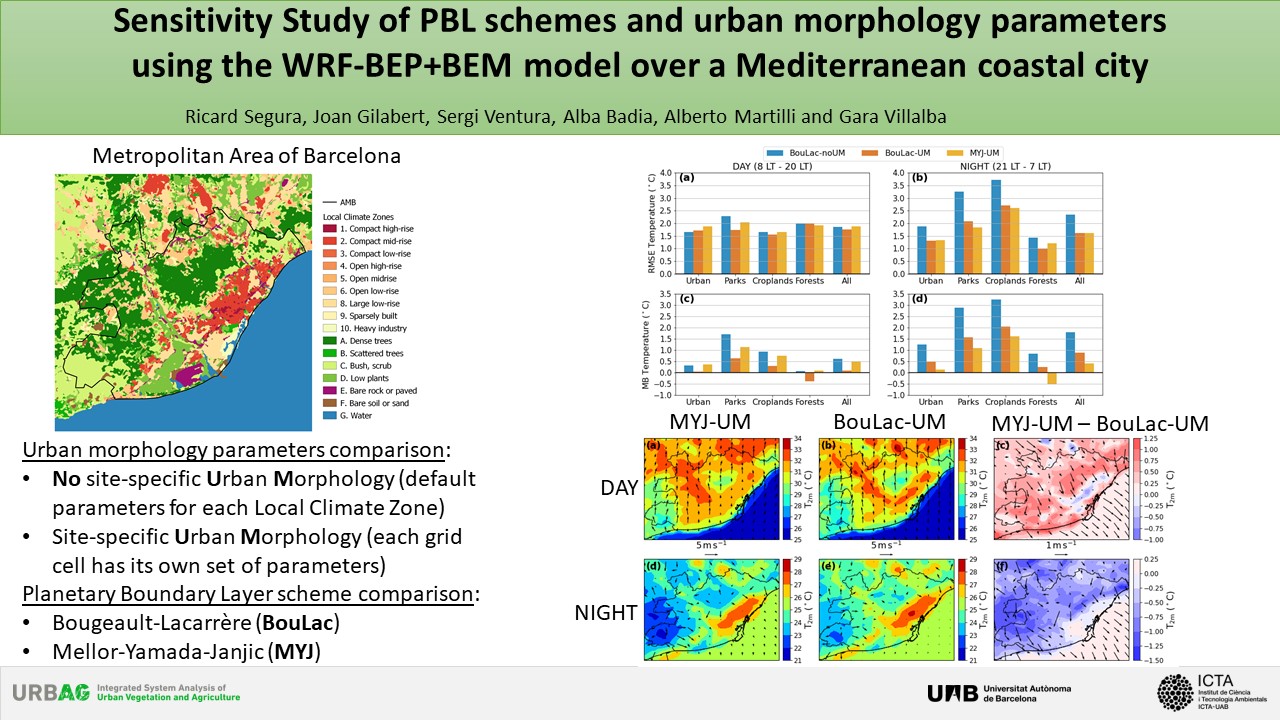 Cities house over 50% of the population, despite covering only 2% of the earth’s surface area. With the increased urbanization, the impact of climate change in urban areas is seen as a major problem. In the case of the Mediterranean region, the increase in frequency, intensity and duration of extreme heat wave events supposes a significant risk for the population. These factors have raised the focus on understanding and modelling the impact of extreme heat events on cities and to improve the simulation of these events to investigate possible heat adaptation/mitigation measures to ameliorate urban temperatures. This study investigates the sensitivity of high-resolution mesoscale simulations of the Metropolitan Area of Barcelona (AMB) to different urban physical parametrizations for a heat wave event in order to improve urban atmospheric modelling of Mediterranean coastal cities and to reduce uncertainties. The simulations are conducted using the WRF model coupled to the Building Effect Parameterization and the Building Energy Model (BEP+BEM) at 1 km resolution. The physical aspects in WRF that are analysed are: 1) the refinement of urban morphological parameters; and 2) planetary boundary layer (PBL) scheme. The results show that the inclusion of more specific urban morphology does not suppose a better performance of the WRF simulation in comparison to the use of 11 urban land-use classes with averaged urban morphological parameters, although it reduces systematic errors on night-time near-surface temperatures, especially in urban green areas. The comparison between PBL schemes shows that this aspect has a significative influence in the simulation of potential temperature inside the PBL and on near-surface temperature and wind. Moreover, the impact of urbanization on the urban boundary layer (UBL) is determined for the AMB simulating a scenario with no urbanization inside the AMB (all urban areas are changed to croplands). Results show that urbanization not only changes near-surface temperatures, but it has a considerable reducing impact on sea and land-breezes, and an intensifying effect on the PBL height. 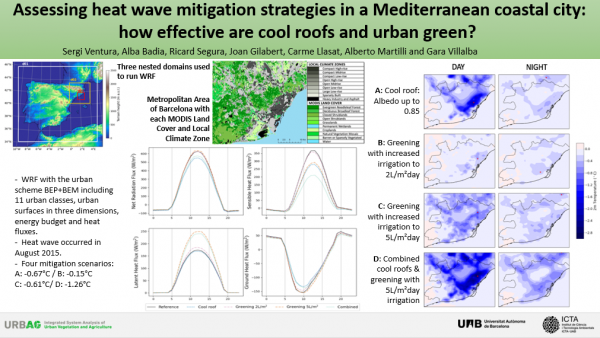 Heat waves (HW) are expected to become more frequent and intense in urban areas, where currently 54% of the population resides (United Nations, 2018) and 60% are expected to do so by 2030. Urban policy makers are proposing various mitigation strategies, but currently lack the tools to determine how effective they will be in terms of the city´s geography climate and urban morphology. We use the Weather and Research Forecasting Model (WRF)  with the multi-layer Urban Scheme Building Effect Parametrization (BEP) and Building Energy Model (BEP+BEM) (Martilli et al., 2002), to simulate three scenarios proposed by the Urban Master Plan of the Metropolitan Area of Barcelona (AMB) for potential implementation. We include detailed input data using cartography at 10 m resolution and eleven urban classes.  We simulate a HW episode that occurred in July-August 2015 when temperatures reached 40°C during the day and did not go below 25°C at night, for more than five consecutive days. The three potential scenarios simulated are: 1) Increasing the albedo of rooftops to 0.85 for certain urban classes, 2) Increasing the urban green by an additional 255.64 ha according to the proposal of the Master Urban Plan for 2030 with two different irrigation schemes and 3) a combination of these two complementary mitigation strategies. We find that the cool roofs reduce temperatures best during the day (average reductions of 2.22°C), while the additional green areas help moderate temperatures evenly during the day and nighttime (average reductions of 0.15°C and 0.17°C, respectively). However, when irrigation is increased from 2 to 5L/m2day, the temperature reduction potential during the day is intensified due to the cooling effect of more evapotranspiration. The thermal regulation potential of the combined scenario is the most propagated over the AMB and has the highest impact with average daytime reductions of 1.26°C and maximum reduction of 4.73°C at 13:00 UTC. 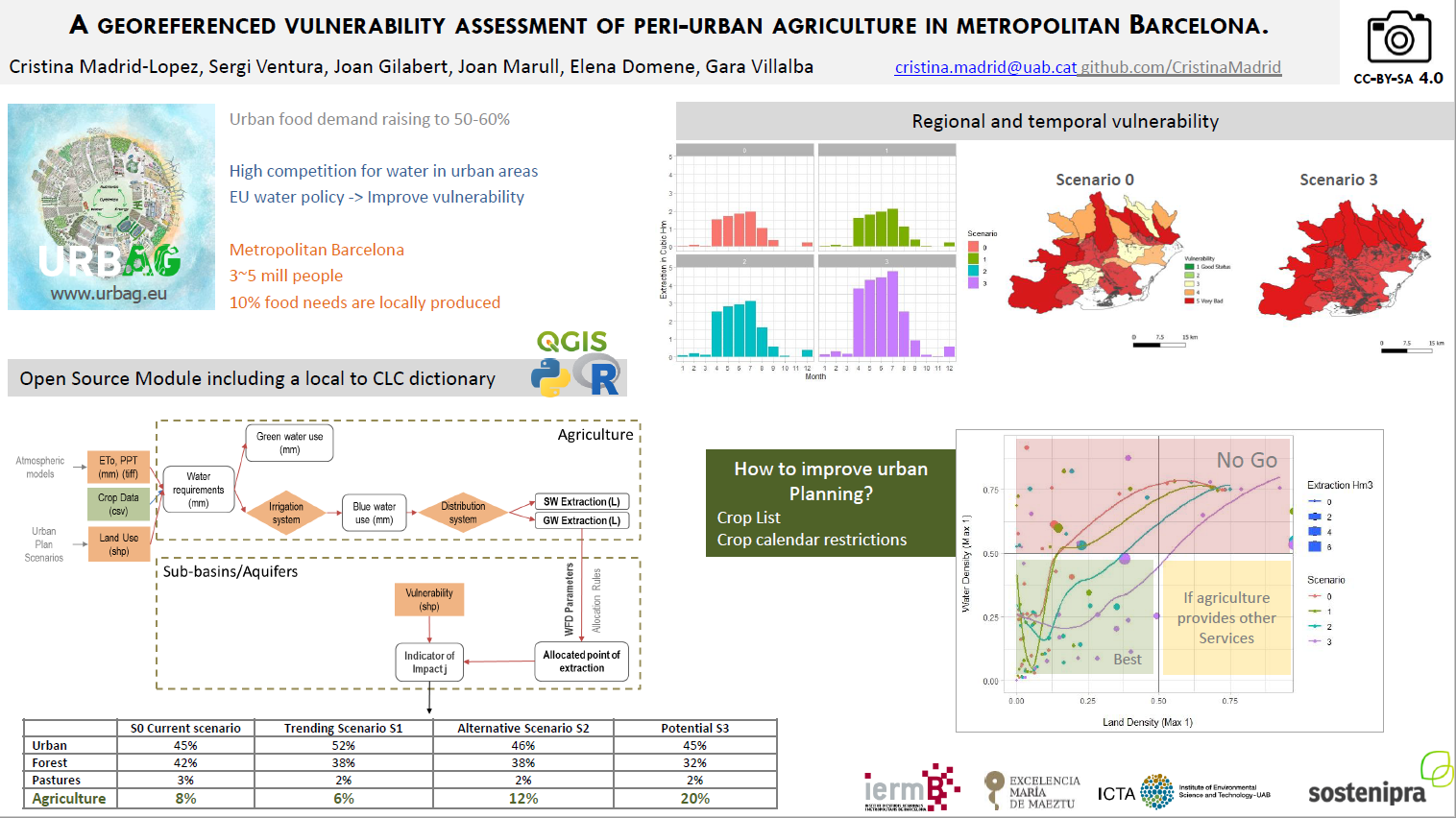 The Fitness Check on EU water legislation concluded that there is a need to integrate water issues into other policies such as those related to urban planning. The increase of population in urban areas is expected to raise urban food demand about 50% to 60% globally by 2050. This intensifies the use of water for irrigation purposes as urban planners implement peri-urban agriculture as a way to increase food security and protect ecosystem services from urbanization. If not properly planned, urban and peri-urban agriculture can result in increasing pressures over water resources, such as aquifer depletion or nitrate pollution which impact the overall status of the water bodies. As cities start promoting local agriculture, it is important to provide policy makers with tools to determine the impacts of food production on water resources, from a geo-referenced, systemic water-energy-food perspective.

In this work, we propose a method for the regionalized assessment of the tradeoffs between peri-urban food production potential and the associated impacts over water resources and apply it to the Metropolitan Area of Barcelona (AMB). AMB is the most populated urban area of the Mediterranean coast and sixth in Europe. With over 5 million people, the AMB only produces between 7% and 10% of its food demand and the new Metropolitan Urban Master Plan (PDU) scenarios foresee a growth in agricultural land of up to 20%.

The method we propose includes three stages. First, we map peri-urban agricultural land uses available from the local land use classification by CREAF and reclassify them to Copernicus’ CORINE land cover taxonomy in order to facilitate replicability and comparability of results. Second, we use the Water Framework Directive water body status index (high, good, moderate, poor, bad) to create physical vulnerability maps of water bodies. Third, we study how water use relates to water impacts using the vulnerability maps. Following this method, we assess the water-food tradeoffs for four scenarios of agricultural land change, classifying agricultural land according to their food supply potential and water impacts. This method can be used to assess agriculture in other metropolitan regions.

This work is part of the research developed in the ERC Project URBAG: Integrated System Analysis of Urban Vegetation and Agriculture.

This website uses cookies to improve your experience. We'll assume you're ok with this, but you can opt-out if you wish. Read More

This website uses cookies to improve your experience while you navigate through the website. Out of these, the cookies that are categorized as necessary are stored on your browser as they are essential for the working of basic functionalities of the website. We also use third-party cookies that help us analyze and understand how you use this website. These cookies will be stored in your browser only with your consent. You also have the option to opt-out of these cookies. But opting out of some of these cookies may affect your browsing experience.
Necessary Always Enabled
Necessary cookies are absolutely essential for the website to function properly. This category only includes cookies that ensures basic functionalities and security features of the website. These cookies do not store any personal information.
Non-necessary
Any cookies that may not be particularly necessary for the website to function and is used specifically to collect user personal data via analytics, ads, other embedded contents are termed as non-necessary cookies. It is mandatory to procure user consent prior to running these cookies on your website.
SAVE & ACCEPT